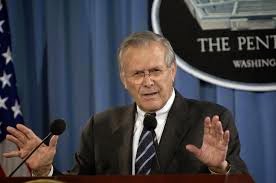 If you think you know all you need to know about former Secretary of Defense Donald Rumsfeld, I assure you that you don't (and probably never will).  But if you want to try a good place to start would be by watching the one-sided bio-documentary called, The Unknown Known.  It's well produced, intriguing, and fun to watch.  However approach with caution, so not to find yourself caught in Rumsfeld's friendly innocent old man appeal and front porch rocking "darned if I know" comments.  Make no mistake about it he's complex, his actions are premeditated, and he's smart enough to know the unknown between us and the other side of the screen. 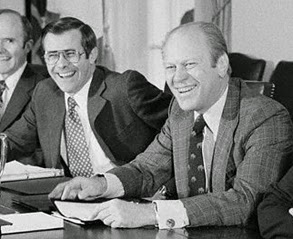 From the start Rumsfeld seems to be on trial.  He opens questioning the read and giving an involuntary sense to the line from a personal memo he's about to share.  "You want me to read this", he asks with the fane of obligation on his face.  He goes on, "All generalizations are false, including this one" then squints and smiles.  It's the line that starts the movie and sets the tone of the film.  It's also the line that Rumsfeld clearly knows offers validation for every good and bad decision he has made in his career and offers atonement for all the rights and wrongs that he's about to share.

Criticisms of Rumsfeld aside, I think the film is great.  The editing is superb, the graphics engaging, and Rumsfeld's stories are as interesting as he is.  Unfolding his long history in public service.  I felt in awe of his bold moves in the Ford administration and his youthful collaboration with Dick Cheney.   Moves that in part lead  to the controversial changes in that administration known as the Halloween Massacre.   At times in his story I felt like I was watching a real life episode of House of Cards with Kevin Spacey, which both scared me and left me looking deeper into who this man really was.  And as time went along I began to understand better the man, his decisions on 9/11, the War on Terror, military torture, and ultimately his resignation in 2006. 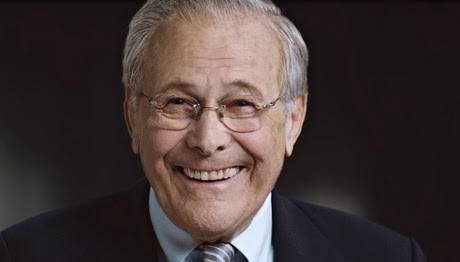 In the end, I remain critical of Rumsfeld as a leader in our history.  I found myself muxed-up by his logic of the 'knowns' and the 'unknowns'.  And I was not long seduced by the archive of his personal memos and his friendly smile.  In truth, I think he is confused himself by his own logic.  It seems twisted enough to help him make sense of his role in our history and the unsettling events that took place under his leadership.

Spoiler Alert: In the films close the director Errol Morris decides to finish it like he started it.   He again puts Rumsfeld on the stand by asking audibly behind camera, "Why are you doing this"?  Rumsfeld responds, "I'll be darned if I know".  And I'll be darned if he doesn't.

Posted by Unknown at 4:14 PM No comments: