THE CALL FROM THE SEA ~ INTIMACY IS EVERYTHING 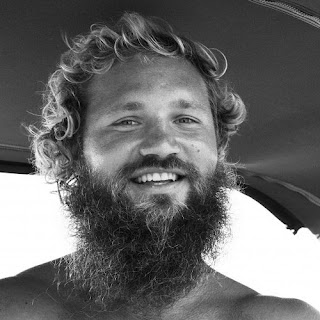 This documentary is the living definition that, CONTENT IS KING!

What do you mean by that?

And adventure, sailor, and all around midwestern boy Alex Rust is my HERO!

Let me start with Alex.

The day trader and over-the-top frugal youth who lived out of his vehicle to save money.  Moves and buys a boat in Florida.  And with work and practice, ends up traveling around the globe.  WOW!  That's some real adventuring there.

Being a skilled sailor myself and having spend 3-months at sea.  I have total respect for the ability to do that.  Not only is that a giant sacrifice and life change.  Not only is does that require a lot of skill, a little luck, and a big set of balls.  It's just some serious dream making (in my humble opinion).

One has to say, 'FEARS BE DAMNED' and go.  The man took his dreams in his own hands and turned them into realities.  That's a powerful craft.

That said, it's not all shits and giggles.  Alex got lost in it all of this.  He's character seems to swing strongly between two very different people.  He didn't seem able to find a middle ground nor listen to those surrounding him that wanted to help.  He began to drowned in his own ego and the more he seemed to have success in his travels.  The more he seemed to push the envelop of reality.

It's not the first time I have seen this in dreamers.  At the end of the 90's I lived on a sailboat myself.  I met many an Alex then.  They both think giant in scope of their visions and are closed off to the realities of the world.  For Alex that turned out to be fatal.

So why is 'content king'?  Simply because the story surpasses the footage.  The documentary is a collage of footage and photos driving a great story.  And why wouldn't it be, that's what Alex shot.  He wasn't a filmmaker thinking story arch and plot.

I imagine he was more thinking, "crazy f-ing idea lets make sure to shoot it".  "Nice sunset, someone grab a camera".  "This is funny, are you guys rolling!"  So director Topher Cochrane was smart enough to know that the story drives the footage and content rules supreme.

Alex sadly goes too far in his search and doesn't return.  Throughout you could see this might end up being the case, but it doesn't make it any easier.

Questions bubble up as to why?  What was he seeking?  Why did he insist on pushing the envelope over and over?  I have had friends like Alex and know only one thing about the type.  They do it 'their way' and damn the consequences.  I have to admit at times I am a little envious of that.

Be sure to check out our interview with Topher Cochran director of Chasing Bubbles
We talk about Alex, archives, evolving stories, and his distribution to YouTube which shot up in a few short months to over 200k views.  You can listen in here.

Posted by Unknown at 3:19 AM No comments:

Andy Irons, have you heard of him?

The blue collar pro-surfer who took on Kelly Slater head-to-head, winning three world titles, conquering the world of surfing, and dying suddenly of a drug overdose at age 31.  That's the quick version.

This DYNAMIC and PASSIONATE surfer was one that I followed closely.

One because his rise-to-fame in the surfing world paralleled the birth and learning curve in my surfing history.  Second and probably the more influential of the two was that I often was told I looked 'like' him.  This isn't me on an ego trip or a wish list of fame.  It really happened.  Literally one day while heading back to my car after surfing a spot north of Malibu.  I was stopped by a fellow surfer heading out.  While staring at me through the squint in one eye he asked, "are you who I think you are"?

I wasn't sure who he thought I was at the time.

Fact was, I would have loved to have been Andy and who wouldn't.  A GOOD LOOKING, WORLD-TRAVELING, PRO-SURFER with a HOT GIRL FRIEND!  This guy was 'living the life'.  It would be a dream come true to step into those shoes.  So I enjoyed the idea that I and my subpar surfing skills could be consider in such company.  How MISGUIDED I was.

Andy's death, while described medically as an 'acute mixed drug ingestion', has been a mystery to me.

Surfing and drugs are like oil and water.  Where do those two elements come together?  I had heard of a rise of meth-head surfers charging the line up in 2006.  And while living for a short time in Santa Cruz, I even feel like I came across a few in my time in the water.  Then again it's hard to say, maybe they where just excited to be out surfing.

Why would you even need more than the surf?

Why would Andy ever need more?  But then I didn't really know Andy.  Look like him or not, I only 'knew of him'.

His departure from the surfing world also paralleled the end of my own obsession to surf.  I had given up a profession, relationships, financial stability, and all around focus on anything outside of surfing.  I had literally driven myself to my last dime, even taken on large amounts of credit card debt on for surfing trip after surfing trip.  So I was able to related to surfings addictive nature, but it still didn't answer the questions to his death by overdose as a pro-surfer.

I decided  to solve my addiction to surf by moving away to Italy, where surf wasn't available to me (and my new love was).  Andy by this time was gone.  The questions that arose about his life and death where now sealed off to a few members that knew him best.  His life and death was locked in a vault of those who knew him best.

Then Teton Films announced they where prepping to retell his story in their new project, Andy: The Untold Story of Andy Irons and I was bursting for information.  Reaching out to the team.  I learned a little about there plans to complete post-production, but no one was prepared to speak further on a release date.  I noticed a fundraiser on Kickstarter that was taken down before coming shy of it's goal.  And questions arise whether or not it will be released and when?

Now waiting patiently for it's arrival.  I look forward to filling in the blanks of Andy's story and learning how a mutual lover of surf got so lost in the mix of addictions bigger than himself.  I am intrigued to know of his struggles with bi-polar disorder and uncover what he added to the lives of the people who loved him most.  Watching the trailer for a short second, I was back in my own glory days of surf.  I was young and dreaming that I was like him again.  I can only hope that the film will bring me a little of the joy I got from people thinking that I was and a little resolution on what happened in the end.

And learn more about Teton Gravity Research and their great work history here:

TGR is the leading brand in action and adventure culture media company. TGR’s world-class storytelling has captivated audiences for more than 21 years. With a global, multi-channel footprint, a thriving millennial audience, award-winning multimedia film projects, a rapidly growing experiential platform, and unprecedented viral content, Teton Gravity Research is one of the fastest growing media brands on the planet. TGR is a proud member of Surfrider Foundation, 1% For The Planet, BICEP, IMBA, and Protect Our Winters. For more information on TGR, visit TetonGravity.com.
WE'VE MOVED TO: www.DocThisReviews.com

Posted by Unknown at 5:44 PM No comments:

Climate change real or a hoax?

Not to be a Leonardo DiCaprio whore (which I am) or a mainstream programming (National Geographic) pusher, but this is a center stage topic that can't be overlooked.  To add to it, this isn't a Zeitgeist telling of climate change (I love Zeitgeist docs, but you get the point).  In fact this documentary is far above par for NatGeo's work, which is usually mainstream TV processed crap.  No, this is visually captivating and on point.  A rare look at the realities we are now facing in the world of today.

Will this version just be a bleep on the radar like Al Gore's An Inconvenient Truth)  or will this help start the wave of change that we need in the world.  I would first start your assessment from watching and then comment on our Facebook or Twitter pages.


#ClimateChange
Posted by Unknown at 3:48 AM No comments:

WHAT IS DOC THIS?

If you haven't been following Doc This over the years, this is for you.  If you have (I bow respectfully to your attendance) and want to make it very clear who we are!

We're a community of artist, documentary lovers and makers that are here to work together.  Learn from each other.  And share about what it takes to navigate this media saturated world.  To make our work shine!

After years of struggling to get my work in the hands of its audience and not finding an open source or community to collaborate with and help find the way.  I decided to kick it off and help others like me find the path.  That's what THIS is.

Contact us, share with us, tell us your story's.  Join in and lets work together to build this community and art together.

And come join us and sign up at our new site: DocThisReviews.com

Posted by Unknown at 6:17 PM No comments:


I had to send this out as a view of the week.  This is something between creepy and crazy.  People who love their 3d babies, well this is someone who makes them.  Start to finish you take something as this and make it look interesting.  You're doing all right in my book.  From Spot Welders out of LA enjoy, Doll House.

***FYI: Followers we are moving soon to a new url domain.  Check it out it's in development and send feed back to our facebook or twitter page: DocThisReviews.com

Posted by Unknown at 4:10 AM No comments:

The Many Sad Fates of Mr. Toledo, is a short documentary presenting the insightful and anxiety driven project of Phil Toledano, produced by Joshua Seftel at The New York Times.  Stemming from his biggest fears and the lost of the two key figures in his life.  Phil seeks out to visually tell each of his biggest fears in photo and in doing so connects to those fears in us all.  With a sense of awareness that defuses his narcissism and a caring family that suffer through the experience with him.  This documentary short is both intriguing and touching in a way that can only be fully experience by seeing it to it's finally.

Posted by Unknown at 5:46 PM No comments: