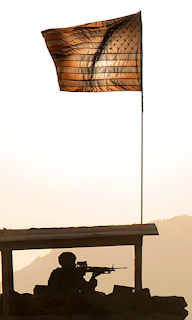 I recently was introduced to the film, Standing Army by an Italian friend of mine who works at RAI, an Italian TV network.  He thought it might be something I would have interest in watching being I am an American, a veteran, and a filmmaker, so he gave me his copy to watch.  The film was made by an Italian production crew who were inspired to make the piece after the announcement that the US military had scheduled to build a new base in Vicenza, Italy and continued to do so through popular opposition of local's protesting and outspoken political disinterest from the region.  Starting with the filming of the protest, then taking a tour of Camp Bondsteel, in Kosovo, and following this by gathering an in depth list of unclassified statistics and archival footage of the US military, the production team, led by Enrico Parenti & Thomas Fazi worked for 3 years to put together a complete break down of the United States military's current and growing presents in the world, the effect on the countries it resides in, and the probable motives and dangers behinds its growth.  In the end what they came up with is an interesting diagnoses for a problem that I think most Americans are already blindly aware of.

"Standing Army" is an interesting title. The visual idea that I get from this is a military literally standing in uniform waiting for something to happen.  Since in this case the military we are talking about in is the US's military, I find the topic just that much more compelling.  Growing up in the US and thinking that, “our military is the best in the world” as my drill instructor would yell out in boot camp, has been one that I cannot deny saying I have enjoyed with a sense of pride.  But this film puts that ideal in check.  Coming from the viewpoint of a film crew from outside of the US who then go into the US for perspective, by interviewing scholars and authors such as Noam Chompsky, Catherine Lutz, Gore Vidal, and others. Then from there proceed to follow the presents of the US military around the globe.  The film does a good job offering insight on a subject that is difficult to fully conceive while living within the boarders. 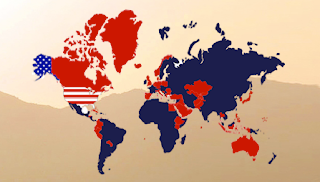 Using field research, archival footage, and expert interviews to depict the US as a form of “empire”, the film works to connect what it sees as the problematic over-sized growth of the US military and the ongoing widely ignored warnings from presidents in the past (Washington & Eisenhower), who tell of the threats posed to a democracy by the over-powering strength of, "the military industrial complex”, a term I first heard in the film, The Fog of War.  The piece continues to develop the idea by working to lay out all the data to diagnose the symptoms of our overgrown military pointing to terrorism and the wars outside of the US as gross indicators of the problems we are creating for ourselves.  In addition it goes on to connect the ever-growing relationship between the interest of the world's oil contractors and the visible locations of growth in recent years by the US military.  It is a connection that seems to have been pointed out so much in recent history that it has become little more than a resounding gong in the ears of voters preferring the local news over reality TV.

Highlighting the dysfunction of the overgrown military system with its ability to seemingly go where it wants when it wants and the damage that it creates on the countries and cultures in its path is painfully unattractive to watch, but none the less shamefully unshocking as we have bigger problems ringing in our ears from Abu Garab and Guantanamo Bay.  Most painful however maybe the more obvious fact that our military has for a long time now been being used for something more than, “standing ready to protect its country in time of need".  Instead as this and other films of its like suggest, it has started to become a complex organization that aims for economic stability through war and does this by playing out its pawns and chips where it sees fit.
It isn’t all kicks and giggles however and the film does have its weaknesses.  The main being its lack of contrast to its subject which pushes its message toward echos of propaganda.  Speaking from the point of view of its expert interviews, the film rests heavily on the perspective that the US military is, “the 800 pound gorilla in the room” and it does little to offer input from professionals who oppose this concept.  Using select clips from a public speech given by Hillary Clinton to serve its point  and manipulating the coloration on a clip of Barak Obama, to make him seem cold and distant.  The film seems to be comfortable manipulating powerful individuals as it pleases, without offering interviews from the members of the political systems it attacks.  Furthering on the point even the music scored from the opening credits pings with an audio streak of paranoia and while these factors do a good job of maintaining my interest, it weakens the point the film works to make by leaning to hard to one side. 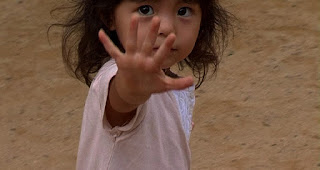 Even with this in hand however one cannot help but note how the US military seems horribly insensitive and uncaring when watching the ramblings of Edward Luttwak ( Consultant to the office of the Secretary of Defense) as he spews uneducated angry rhetoric towards people who are getting in the way of the military's interest.  In addition one must recognize that facts are facts and you cannot miss the validity of some of the claims of the US military's interest toward "empire" when listening to author William Blum as he rolls through a list of recent wars and the bases that were born out of them.  By the end the message is clear and one cannot help but better understand the feelings of having another country's military existing willfully within the boarders of ones country's land and more to that the US military, more often than not, is the one who is doing it.

On a side note, Standing Army has gotten recognition in parts of Asia, Europe, and the Middle East.  It still does not have distribution in the US yet, but you can see the trailer below and go to the Standing Army link and click to buy a copy for yourself.  It's a good film, professionally done, and of value for those wishing to better understand what is happening with the US military influence on the world.

Thanks for reading, I hope you enjoyed, and comment & join for future reviews.


*Special note: On Wednesday, Oct 15th I was able to interview the director of the film Enrico Parenti and have posted the file here for your listening: QUICKTIME LINK INTERVIEW
OR LISTEN REAL TIME BELOW:

BUY YOUR COPY AT: