There are times in life when you come across a film that is neither great in whole nor dynamic in structure, but when it is finished it leaves you walking away feeling changed and wanting for more while still trying to digest that which you have seen.  The film, Mindscape of Alan Moore is just such a film.  Hidden behind a mass of hair and beard,  mysteriously wearing Goth style rings, a cut off T-shirt, and flipping magical cards Alan looks a little of Charles Manson with a soft side.  He is the type of character that would tend to send those with a weaker stomach off course from the start, but if you are able to see past the distraction of appearance and resist the temptation to run, while still holding guard to your best known wisdoms, you will end up walking away from this film and this mans perspective on life with a few morsels of chewable information that can offer an interesting perspective into the human condition and creative ways to see outside of the box. 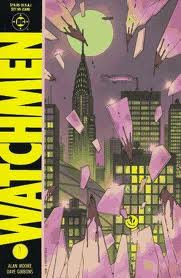 Opening with Alan Moore facing camera and narrating his own life’s history.  He moves quickly to show his manipulation of language by using a simple word like “trafficking”, a term usually associated with illegal activity of some sort or another, to refer to his writing style in fiction, “I traffic in fiction…I don’t not traffic in lies...”.  This behavior, while distracting, works to color this character from the start offering a quick insight into the “case study” of the man that follows.  Turning quickly to his early childhood, the film starts out going into the younger years of Alan Moore, a now famous American and International comic book author.  Sharing in what seems nearly one take your deepest childhood insights and errors.  While sitting in front of a camera with lights a blare and crew around is not easy to do without twitching, coughing, or grasping for a breath.  But the calm with which Alan Moore rolls though both failure and defeat only serves to draw me closer to what this character has to say and better explains the man I am looking at today.
Dropping out of society and lost in the bottom of the work world cleaning toilets and working with animal carcasses.  He makes a blind leap into the world of comic book writing or rather what he calls, “a shot in the dark…to be an author”.  In doing so he learns and passes on one of life’s great truths, “To make such a leap you have to put aside the fear of failing and the desire of succeeding…You have to do these things purely, because the things we do without lust of result are the purist actions we can take.”  This line struck me as odd coming from a man that by appearance I would have assumed other wise and I started to tune in for more of what he had to offer. 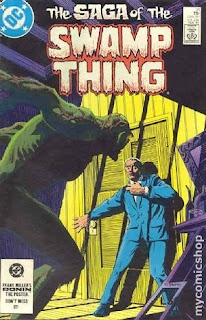 Passing through a scrim of personal history, Alan begins to open up about his work for DC comics, The Swamp Thing.  He calls the move to America the “brain-drain”.  However his feelings on Fascism in America and the general misuse of authorship are communicated in tongues.  And while he doesn’t uncover these concepts completely, he seems to have channeled the deeper message into his first and more famous piece of writing called, Watchmen (which now has been made into a movie).  Here again Alan opens up to simplify some more difficultly understood concepts on fame, which had begun to creep up on him from his works in the US.  In doing so he does a good job of making the topic enlightening and tangible with simplified views of its dangers and pitfalls.  The most impressive element of his realizations on fame and life in general however, is his choice to live out what he believes and he does so in this case by returning back to his roots in Northampton, England and starting a new chapter of his life.
In turning 40 Alan decided to call himself a magician.  And it is here in the film, and possibly in his own life, that Alan begins to drift from concrete terms and manipulate logic and history, in an artistic and somewhat dangerous way, to better make sense of his life and its surroundings.  It’s a moment where when watching one might get lost, confused, or conflicted.  But it is also a moment where one can see the mental shoes of a very intelligent man come unlaced and allow for an insightful breakdown to the meta-physical (thought) structures of society.

Aligning writers with Sharman’s of old and seeing them in the modern day as prostitutes striped of their credentials.  He highlights the power of the written word and how it is horrifically misused today.  However among these interesting and enchanting insights he tends to drift between factual points and creative ideals as if they were the same.  A skill no doubt he has needed to hone from authoring great fiction for so long.  It is here that Alan’s insights are both interesting and dangerous.  And it is advisable when listening to hold an air of caution in the wind.
All in all, Alan takes you to places in the mind that are locked with a key and offers to open them up with the twists and definitions of his own.  His seduction of knowledge and manipulation of thought is an area of both enlightenment and concern.  Over the 78-minutes of dialog, he uses his slow-pace seductive voice to work away at nearly every major facet of life.  Highlighting the limitations and boundaries of the mind, defining how each man, women, and child makes sense of their surroundings, attacking the misconstrued concepts of sex and war, inviting one to join in the idea of “creative (mind) space”, and finally offering insights into the mixing pot of information from the booming growth of technology and invention that is sculpting our future today.  He seems not to miss a beat.  And in the final moments of the film, he offers some of the more dynamic and creative concepts that I have heard of to date.
In closing, if you can put aside the at times intimidating and strange visuals.  Set aside your inhabitations with the social and physical appearances of the subject.  And take the time to ingest and breakdown some of the thoughts of the man who is speaking.  You will find this film to be very stimulating in mind and creative in perspective.  And in the end, you may walk away better understanding a type of character and a life perspective that is most likely far different than your own.
Thanks for reading.