I was first introduced to the film Our Daily Bread, in 2009 while watching a series of documentaries revolving around industrialized food, that I had gotten through Netflix. Within the grouping of three films, Food Inc., King of Corn, and Our Daily Bread, this one stood out to me as unique in its approach to the subject matter in its choice to go without dialog or narration. By choosing to go without words and leaving only for natural sound the piece appealed to my thoughts in ways the other two documentaries did not and forced me to think for myself about what I was seeing. 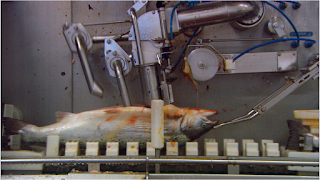 Hanging blankly from the hooks in the ceiling are the carcasses of pigs passing by the lens as the film opens by following behind an employee cleaning the floors beneath. Cutting from pigs to mechanized gardening, from mechanized gardening to cows online for slaughter, from cows online for slaughter to a grand yellow field of sun flowers being sprayed by a crop duster, and from a crop duster spraying to baby chickens rolling down a conveyer belt like car parts in a factory, the film starts out with a visual pace that covers the gamut of food production and leaves little room to wonder how what’s on the table for dinner got there tonight.

Colorful and awakening the film stirs emotions as it unfolds a mix of footage from food production all over Europe. Making industrialized food production look beautiful while at the same time speaking of its dangers isn't easy, but this film did a good job of it and made me feel as if I was watching Baraka meets food production. In its 90-minutes of footage the piece leaves you in awe at how far we have come in mass producing food and then begs you to ask the question if maybe we should start to go back.

INTERVIEW WITH DIRECTOR NIKOLAUS GEYRHALTER:
Taking the opportunity to delve deeper into how it was made, where the idea came from, and how it effected the people who made it.  I took the opportunity to speak with director Nikolaus Geyrhalter about the making of the piece and this is what he had to say:

DOC THIS:  My first thought is how did you come up with the idea of building this piece?
Nikolaus: Usually, I make the films I would like to see and that no one has shown...and so I was very curious about the subject. My interests didn’t have to do so much with the message that the film has at first instead I initially just wanted to see what was happening with our food and then figure out for myself what the film was about.

DT: In regards to the audio, what drove the choice to go without it in this project? 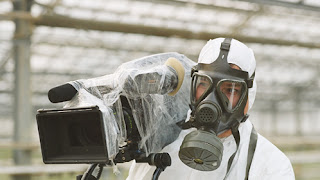 N: Actually I wouldn't say it’s without audio. It’s without narration and commentary. I mean there is audio in the sense that there is the original sound and this sound is so telling. I honestly wouldn’t have known what to add. I mean - I wanted the audience to be able to really see and hear and feel for themselves and then be able to build up there own opinion. I think that this style versus telling them what to think is much stronger because everyone really can enter the same room, the same area - much like I did when filming and then hopefully they can be over-whelmed in the same way that I was. So I think it was just the right choice to leave the audience alone with what they see…like I was alone with what I saw when I was shooting it.

DT: With an experience like this, how does it changed you?
N: Well –um I was shooting the piece over two years, so I saw a lot of change. But I guess for me what I would say is this...on one hand now I really do believe that organic food is better food. I would never think that for me to become a vegetarian would solve the problem, but I guess I just think that you can try to go organic as much as you possibly can. The other thing I learned is if you try to eat as clean as possible and go organic and if you do all the ‘right stuff’ to try to avoid this industry, you simply can’t really avoid it at some level.  Even if you can escape it because you have the money to afford to buy better food you must realize that there are other people who may not have that money and won’t be able to do that.  So it is the kind of reality that we are facing and living in whether you like it or not…for me I guess there are a lot of concerns.  But at the moment I guess do what I can.  I grow my own potato’s and try to live as organic as possible and that is it.

DT: I am curious with some of the factories with the chickens and the cows and what not.  Did you light those rooms or did you just shoot them with natural light? 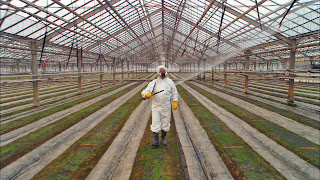 N: No, it was all natural light. I didn’t have the chance to put any artificial light in.  Although it wasn’t really necessary because the light as it is it’s part of the architecture - it’s part of the structure of those rooms, so I was very happy to just work with the light that I found.

DT: Where there any scenes that you had to cut out for the length of time or other reasons that you wish you could have left in?
N: You know we cut out all the interviews.   We did do interviews, but it was a decision during the start of editing that interviews were just too boring and so we decided from the very beginning not to use any interviews at all.  It was just that we felt that what ever the people interviewed had to say it would not contribute to the film at all because what we saw with our own eyes was much stronger than what people could tell.  So this was the big change of direction in the film that we decided that we wouldn’t have any thing the interviewers said in it…it was not the original concept.

DT: When you were starting to work on it, how did you go about getting funding? Or how difficult was it to get commissioned for this project? 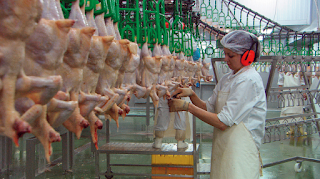 N: I have to say that in Austria we are very lucky because there is serious funding for documentaries especially if they are made for cinema. And usually you will get some amount of funding for research and then you have to apply again, but if the project is approved you will find they are able to award good amounts of funding for documentaries here.  Now it is getting a little more complicated as the budgets are getting smaller and smaller every year, but at that time to receive funding was not that complicated.

DT: Are you working on anything new now?
N: In the moment I am about to finish a film about Europe and this is also a film without commentary or narration. From the structure it can be compared with Our Daily Bread, but it’s more about where we as a society are standing right now and it also has to do with immigration and deportation.

DT: Is that connected with terrorism, international, or what is the theme connected with?
N: No, its more a bit philosophical about just where our country or Europe in general stands and how superior or inferior we really are or are not.  I wouldn’t even necessarily call it a documentary, but more like an essay.

DT: What’s the name of it?
N: In German it will probably be ABENDLAND in English I think it will just be called Europe.

Reviewing this film and speaking to Nikolaus about its making was an honor and I hope you enjoyed.  As always I encourage you to comment with thoughts on the review or film as well as check out the links for preview and purchase.