On this podcast edition of DOC THIS, I sit down with Mark Achbar and talk about his film, The Corporation.  Over the 20-minute long interview, we had the opportunity to cover the birth of the idea for the film, fund raising, interviewing, and reflections on its success post its 2003 release. 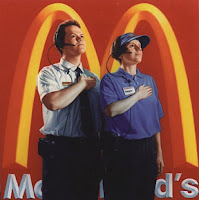 Writing reviews on documentaries is mildly benign.  Offering perspective into the message a film already portrays is somewhat narcissistic.  And feeling like you may open the eyes of the viewer, if the filmmaker hasn’t already, is clearly misguided.  But it is with this awareness in mind that I continue on with reviews, and more specifically this one, in the hopes that some will recognize what others have not.

Outlining corporations as a psychopathic, self-obsessed, disconnected, brainwashing money-monger, who are defined under legal terms as 'a person' and are given all the rights that comes with being one.  Canadian director Mark Achbar, Jennifer Abbott, Joel Baken and crew have sifted through the some 150-years of history since corporations starting cutting their teeth on American legislation to become what they are today.  Tackling the corporation’s legal definition as ‘person’.   Achbar and his crew work masterfully to turn the vary centerpiece of its power against it and bring awareness to just how dangerous this legal terminology is.
Placing this “person” into the seat of the physiologist.  The film then systematically checks off each category that would define a “real person”, as unhealthy and not fit for society.  Having earmarked every weakness and flaw that the modern corporation on-goingly exploits today and further classifying it as physiologically unfit.  The 145-minute piece makes it blatantly clear that if left unchecked, the unleashed corporation will become, is becoming, and in many cases already has become, the monster that swallowed up the sea.

But the big question that looms throughout a film, which offers such clear-cut analysis of the problems we are facing is this, “what does any of that have to do with me”?  It is a question danced upon in the effects of the system on the individual, but not in the actions of the individual on the system.  And it is a question with which one can only find the answer from within ones self.  Because no matter how blatantly aware we become of the facts that tell us of the dangers of corporations like Walmart, McDonald’s, Nike and the like.   Nothing can replace the fact that they make our lives easier and lull us into a sense of comfort.  And while they may manipulate our laws, exploit our world’s labor, and brainwash our children as coins of the future.  They are still a part of a system that we do not see as needing be fixed, and that maybe just the way they would prefer it to stay.
--
If you get a moment to do it, rent a copy for your own perspective and let me know when you do.
~Thanks for reading