THE DEVIL AND DANIEL JOHNSTON by Jeff Feuerzeig

I have a new #1 and it's about to burst out of me.  The Devil and Daniel Johnston may quite possibly be the best developed documentary in the past decade...why?  First and foremost archive.  This film may have the best list of archive of one persons life of any film that I have ever seen.  That alone makes this film number one, but it doesn't even include the story of this fascinating human's life which when told through the eyes and ears of this film, makes me want to jump right into it and be able to have lived a small portion of it myself. 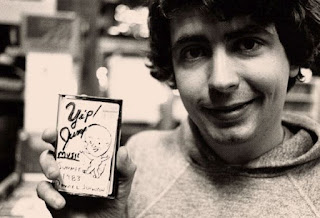 Making The Devil and Daniel Johnston is assembly one of those moments when a documentary filmmaker would be brewing in glory having discovered a mine of archive gold.  The stacks and stacks of archive that surrounded making this film must have left uncountable options for story development and inevitably have given birth to a documentary that felt like a well staged film.  I imagine the other side of the exceptionally large pile of archive would have been sifting it all out and knowing what to leave in and cut.  But in the end you have yourself a great story of the life of Daniel Johnston and all the footage and audio to help take a look into just what it was like.

Raised in Pennsylvania in a conservative home with conservative values Daniel Johnston struggle to fit in but, sometime around his late-teen years he banged his way out of it all with madness and hit the road.  Gifted as an artist and struggling with reality, the relationships with family grew tense and his outlets revolve around mimicking it all through art and short films.  Obsessed with recording his life on tape he gathered great moments of personal thought, ingenious musical growth, and a massive collection of the family secrets that give life to a home we can all relate to. 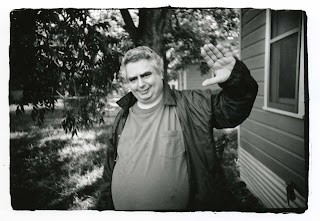 Yet the story of Daniel Johnston like his mind went two ways and as it is with Daniel those ways were always strait-up and strait-down.  Breaking out of his roots he played his way to the top of the Austin music scene and made a roar in the local music that rivals any from that region since.  Raising to his self-proclaimed destiny for fame, Daniel stepped onto the stage of the early MTV and rocked the house long enough to grab the audience and the TV's eye.  Leaving a legacy of music on cassette to build from his agent worked tirelessly to get him recognized and at his peak drove Daniel into the middle of a bidding war between record labels that left treads of legend and infamy.

However with the story of Daniel there was a deal with the Devil and the Devil never forgets his deal.  Crumbling to a halt he crashed his record deal, stopped his music, slashed his art, and brought himself and his father's plane literally to the ground.  Left with the reality of his collapsed mental health Daniel started on a road back to sanity, a road that both saved him and killed whomever he was.

Jumping forward in time to when this film was shot, we find Daniel healthy and singing one of my favorite songs, Casper the Friendly Ghost.  It is here in the film and in this song that Daniel seems at his best and most beautiful.  He is softer, bigger, and older.  He is less of a wire and more of a reflection.  And if you listen to the words of the song it seems he recognizes that he himself has become Casper and Casper was always who he was meant to be.

Since its watching, I have fallen in love with this movie and with Daniel and his music.   I have research more of his work, listened to more of his songs, and taken on an understanding that as the directors share in their commentary, that Daniel quite possibly is one of the greatest song writers and singers of our time, yet unknown.

I hope you will follow up with watching and I would welcome hearing your comments and thoughts.